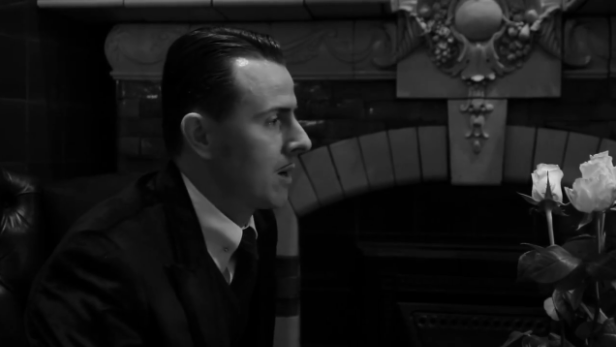 A marriage proposal is the perfect opportunity for guys to express their love in a creative way.  And even if you don't feel creatively inclined, we highly suggest that each groom-to-be spend some quality time thinking of how their bride-to-be would want them to propose. I mean, what lady wouldn't love a romantic story that she can share with her friends and family? Oh, and if it can also be truly unique, well that's even better!

Now not many guys out there would think to propose with a 1920's style silent film like our groom Dean, but he's always known that a film style marriage proposal was the way to go.  You see, his bride-to-be Helen is a big movie buff, and her favorite movie of all time is True Romance by Quentin Tarantino.  To make his idea come to life, he first had to get the theater in on it (that took a little persuading) and then he created a movie poster to put up at the historic Station Street Cinema.  The stage was set.  He made plans for them to walk by the theater on their day off, and suggested they go inside and see the movie.  She was all in!  It was completely empty in the theater, but Helen didn't think anything of it.  As they settled in to watch the "coming attractions", Dean's marriage proposal film started to roll.  After "the four longest minutes of my life", Dean commented, it ended with him holding up a sign that read "I have a question!".  At that point, he literally turned and asked Helen to marry him. She of course said yes!  They then popped open a bottle of Champaign and actually watched True Romance together.

Helen still can't believe she didn't figure out what was going on, but just said that "everything about it was just perfect".  Dean said he was pretty confident about everything, but did say that "as soon as the short film started rolling, the nerves struck me, and I forgot the speech I had planned".  No matter, she said yes.  Way to make this a memorable proposal that you knew she would love.  Hats off to ya, Dean!