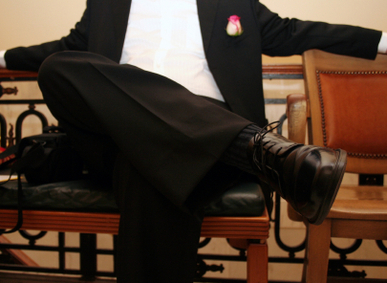 This may seem like an easy one, but the honor of being a best man deserves a little more than just simply asking.  Now, we're not saying you need to put in as much thought and money as you did for the marriage proposal, but he is your best man after all.  We've said this before and we'll keep saying it, your best man should be your best friend... period.  Just because you were someone else's best man or you have a older/younger brother, doesn't mean one of them automatically gets to be the best man in your wedding.  If not right away, they will eventually understand your decision to pick someone else. Being guilted into your choice is no way to start the wedding planning process.  So once you've determined the man for the job, it's time to get crackin' on the asking part.  To help, we've put together a few ideas to make it memorable.

4. A Night On The Town.  Pick a night to meet up for happy hour at your typical hangout.  While ordering some grub and watching a game, drop the news by having the waiter bring out his favorite beer in a special beer mug with "Best Man" engraved on it.  Cheers!

3. Tickets To An Event.  If there's a sporting event with one of his favorite teams coming up, get some tickets.  Buy him a shirt with the team's logo on it, and have "Best Man" put on the back.  Toss it to him on the way to the game, and enjoy his reaction when he looks at the back.

2. Party At Your Place.  Plan a guy's poker night at your crib.  Invite all the guys you want to be in your wedding, and share the news all at once.  Laser engrave "Best Man", "Groomsman" and "Usher" on individual cigars.  Hand them out, and light em up.  Oh, and be sure to up the anti by getting a premium quality cigar for your best man.

1. A Guy's Weekend.  If you're into hunting, fishing, biking... whatever floats your boat.  Make the arrangements.  Treat him to a weekend of fun, and then present him with some special cufflinks.  Have one say "Best" and the other say "Man".  Now everyone will know who the best man is at your wedding.